Paper architecture emerged at the turn of the 1970s/1980s as a conceptual movement of young architects and designers who didn’t want to become part of the Soviet architectural mainstream and created their own parallel reality. It could be found in magazine articles, competition projects and at exhibitions.

The paper architects boldly combined different styles and eras, looked to the past for images of the ideal city and extrapolated them to the world of the future. None of their ideas could seriously be expected to become reality, but many of the issues they raised were later to prove fundamental for urban planning all over the world. Some of them remain so to this day. Russia Beyond has put together ten of the most striking examples of Soviet paper architecture. 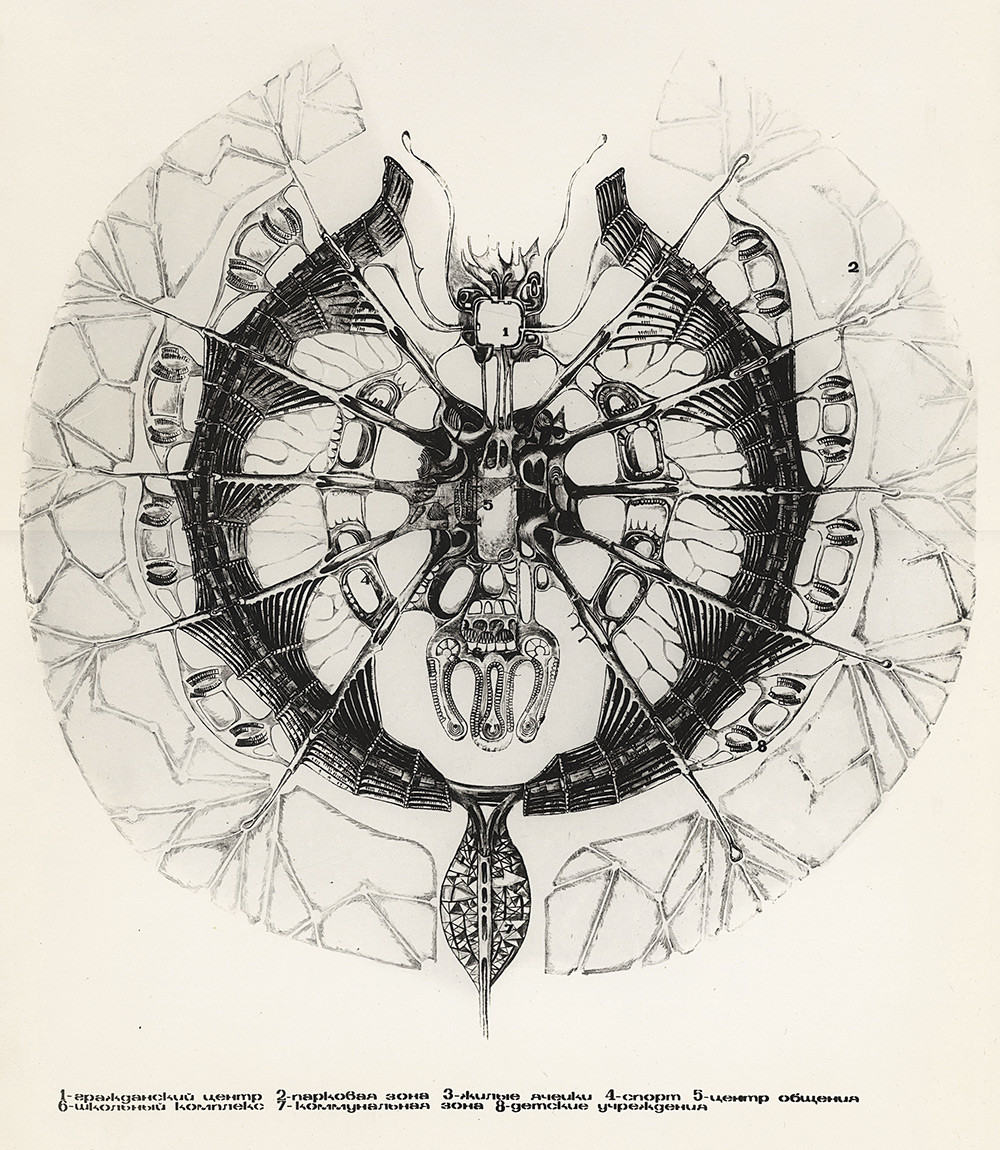 Back in the late 1950s, a group of students from the Moscow Institute of Architecture devised a blueprint for the residential district of the future bearing the name New Element of Settlement (Russian abbreviation: NER). Work on the project continued for more than 15 years, but it never came to practical fruition. It did, however, receive international recognition and was exhibited at the 14th Milan Triennale in 1968 and at Expo 70 in Osaka.

Over time, the key ideas of NER have come to prevail in all contemporary town planning. Among its main principles are: A separation of production zones and residential spaces, a humanization of the environment, an even distribution of people and infrastructure and the development of empty land. Chronologically, the project came before paper architecture, but it was an important ideological component of it. 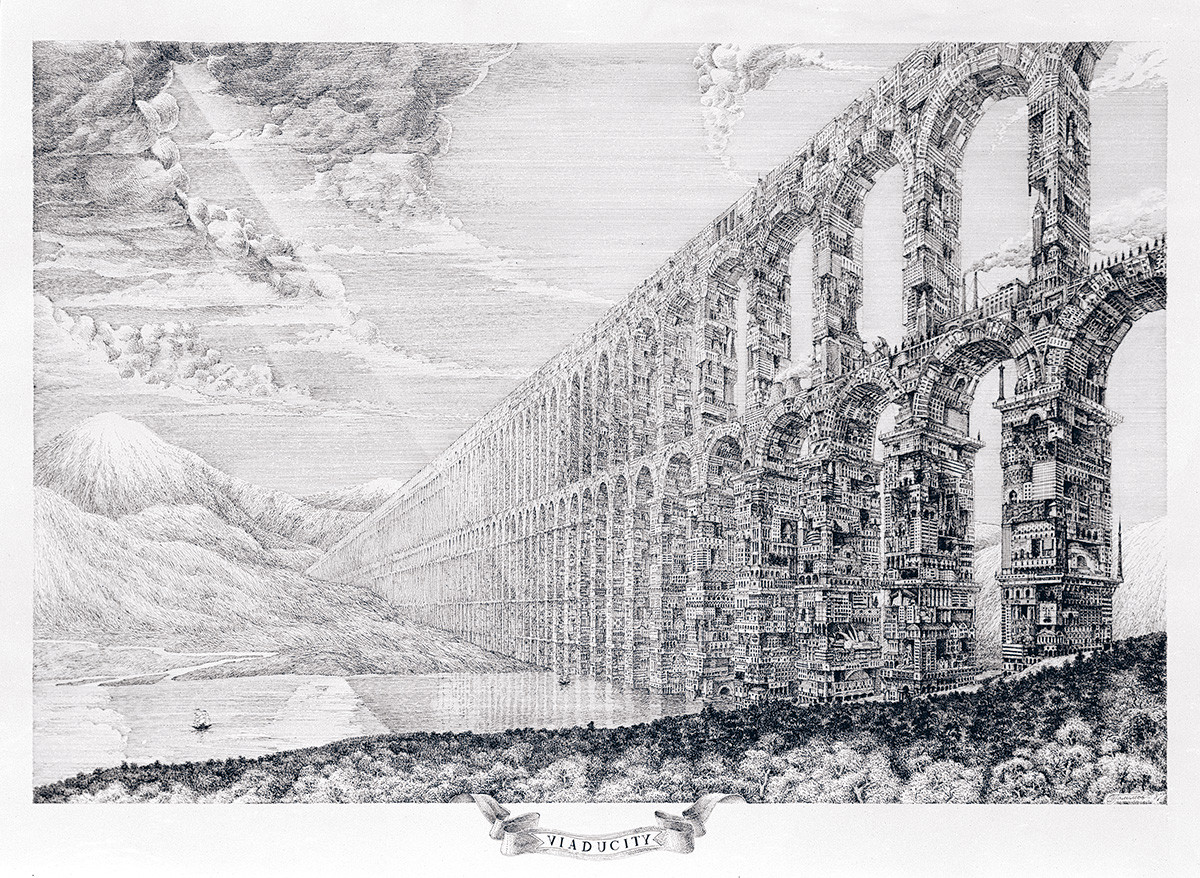 Many of the ideas of the paper architects stretched familiar spatial boundaries in the desire to find new ways for architecture to exist. One such example is the design for an imaginary city by Iskander Galimov and Mikhail Fadeyev. It shows a gigantic stone bridge with railway tracks, houses, factories and retail premises situated on its different levels. 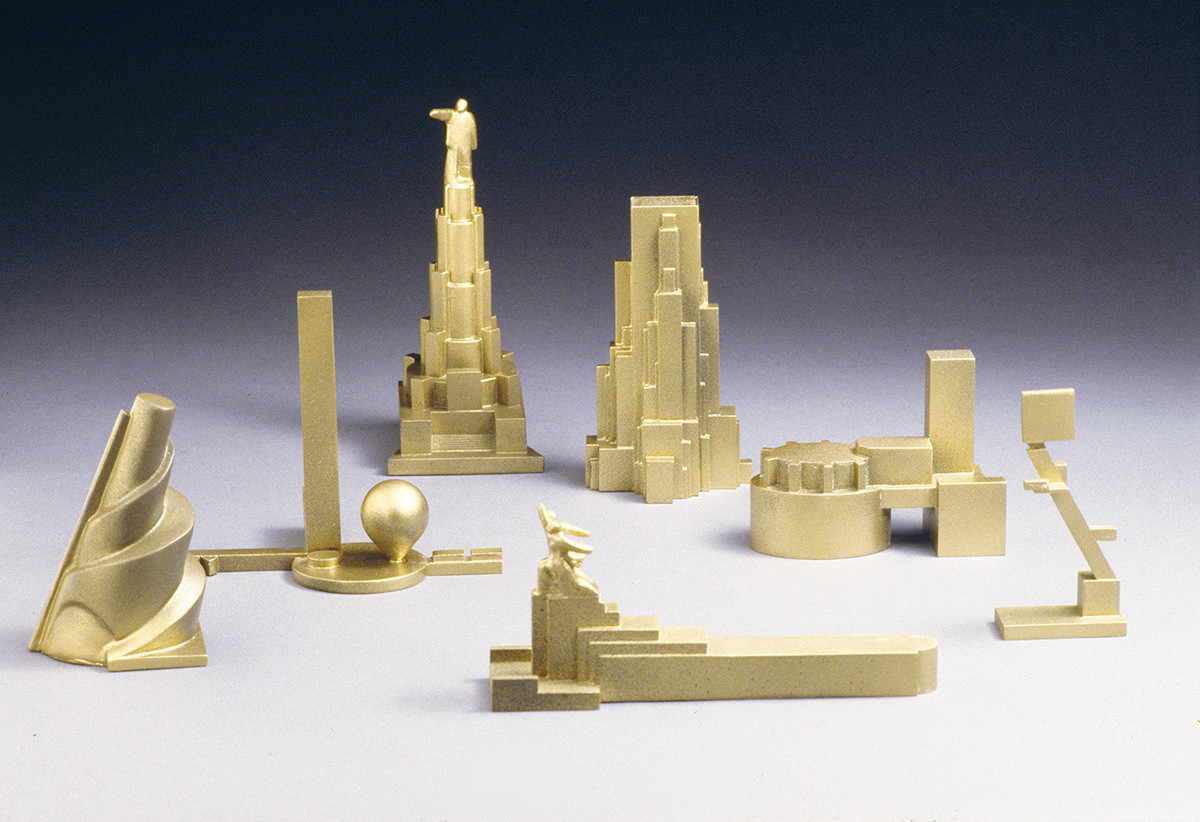 The series of miniature bronzes consists of replicas of well-known monuments of architecture that do not actually exist. They include, for instance, the emblematic buildings of Soviet civilization – the Monument to the Third International (“Tatlin’s Tower”) and Moscow’s Palace of the Soviets. According to Konstantin Boym, these non-existent monuments represent an alternative history of architecture, no less interesting than the one we see outside our window. 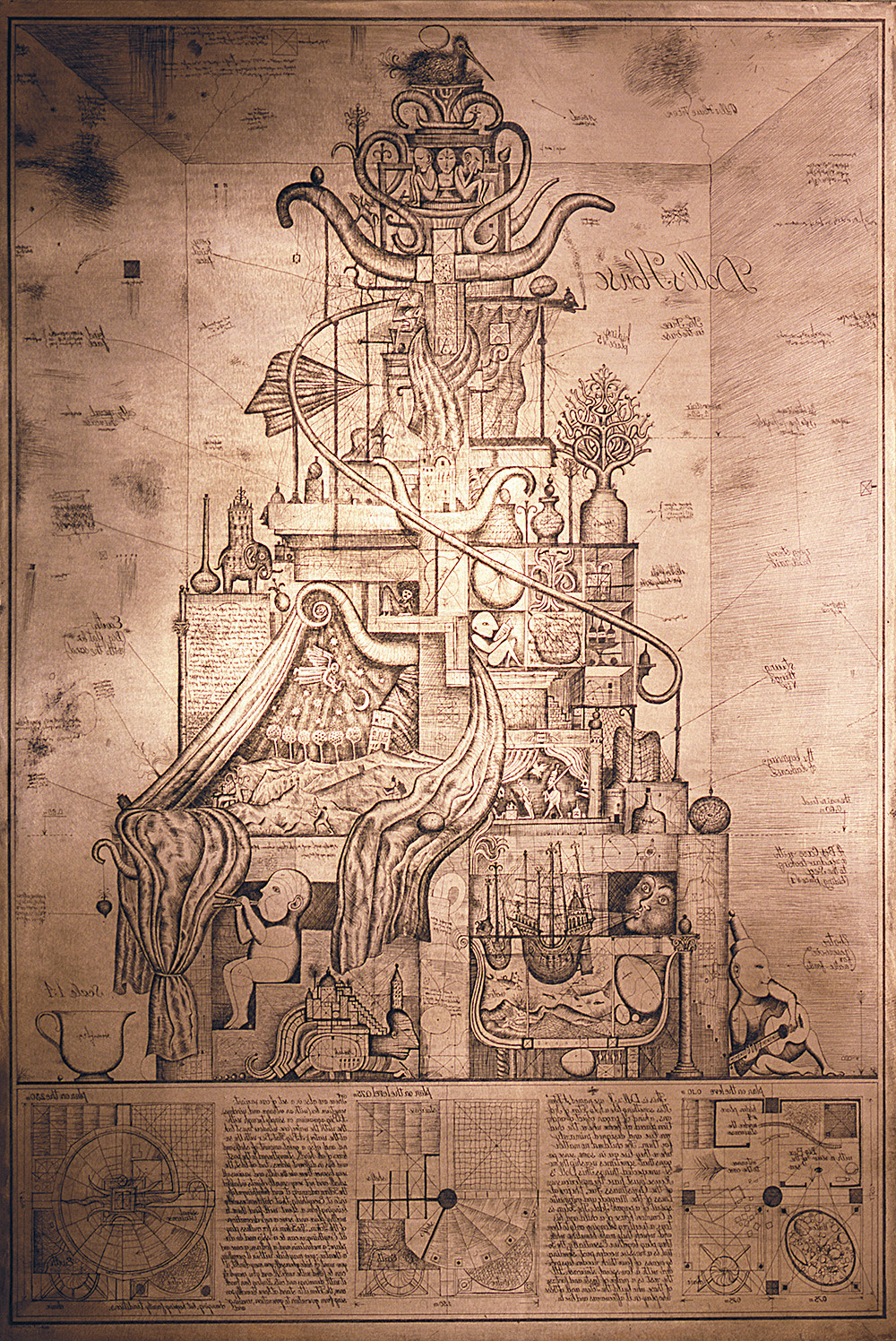 The architects designed a doll’s house with the name Totem, which resembles a sacred totem pole of the Indians, a pagan object of worship. Conceived as a child’s toy, it allows anyone who possesses it to “play at anything”.

The structure is designed in the form of a massive wooden post supported on four stout wooden feet. A spiral staircase is installed inside, while the remaining space is the domain of childhood, which can change at will according to the imagination of its denizens. 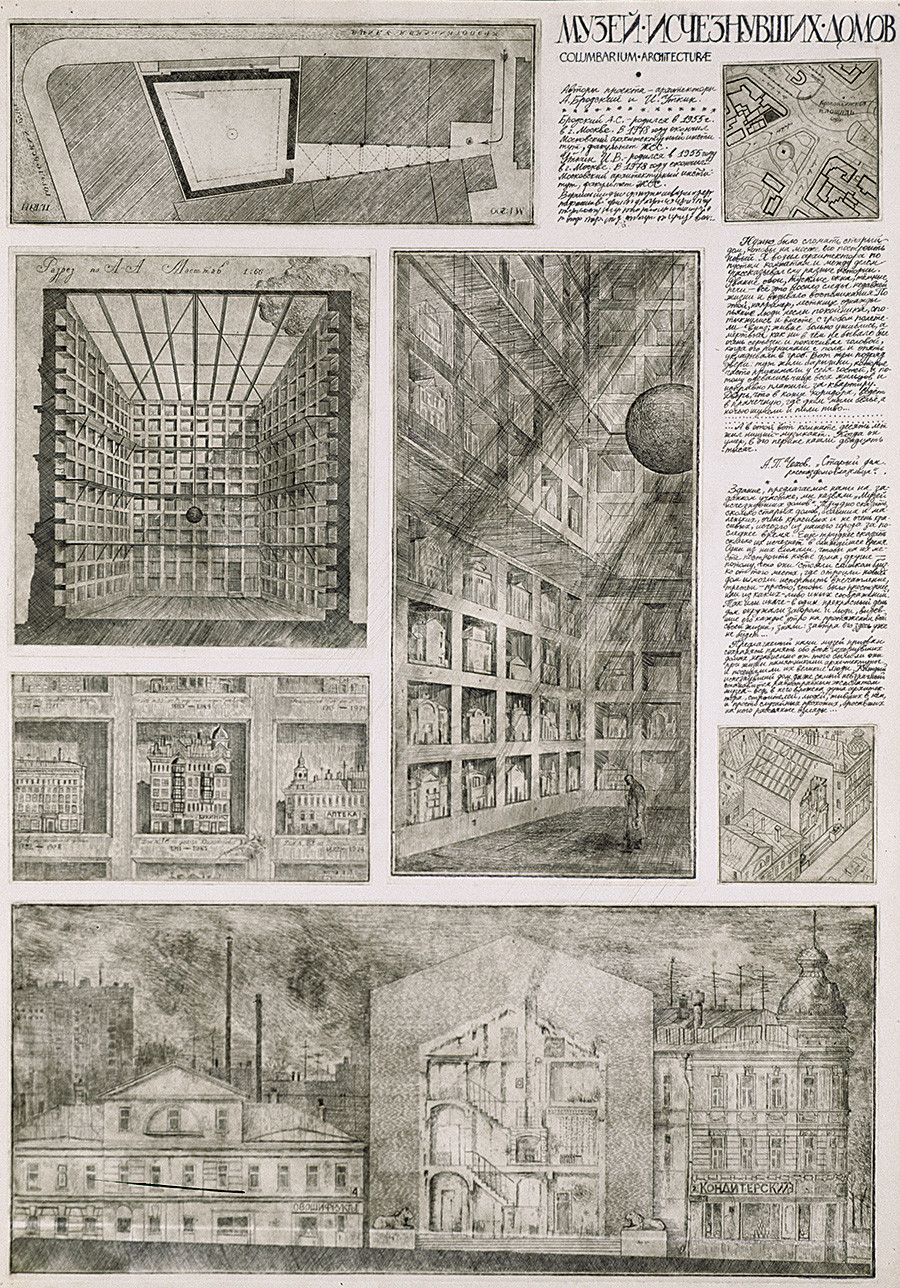 This conceptual work is a kind of memorial preserving the memory of all lost buildings, irrespective of whether they had been of architectural significance in their lifetime or not.

“Every lost building, even the most nondescript, is an equally valid exhibit of the museum, and an accurate architectural model of it gets placed in a niche – after all, it is invested with the soul of the architect, of the builders and the people who lived in it, as well as, simply, that of random passers-by who casually looked in its direction,” is how the architects describe their project.

6. The Stageless Theater, or Roving Auditorium 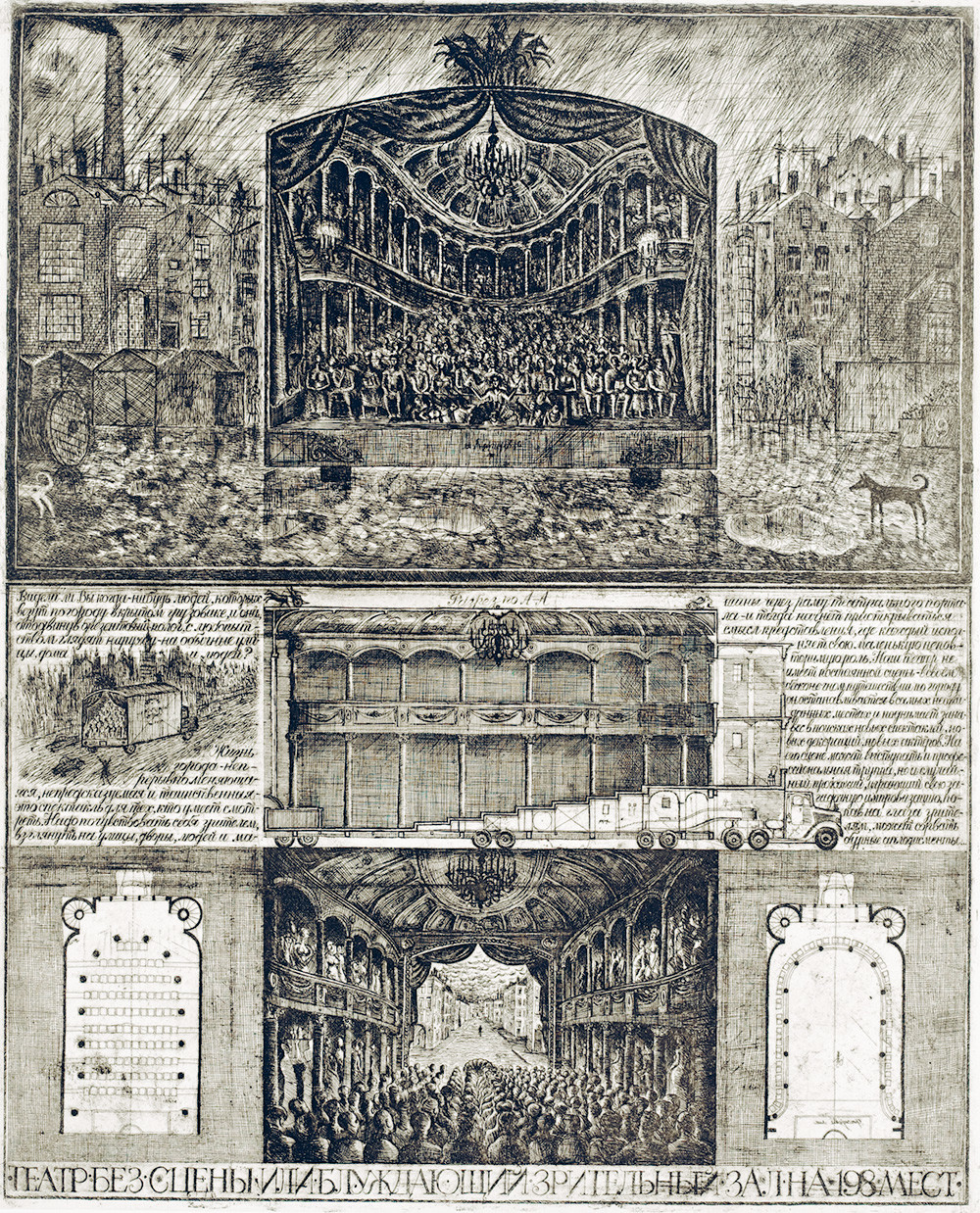 The roving auditorium project is a sort of embodiment of the notion that “the whole city is a theater”. The architects have depicted what a city “for all” could look like.

“Our theater does not have a permanent stage – in its constant wanderings around the city it stops in the most unexpected places and raises its curtain in the hunt for new productions, new scene designers and new actors,” the project description says.

“Professional troupes can perform on its stage, and, equally, a lone passer-by performing an enigmatic improvisation can all of a sudden attract wild applause after catching the eye of the audience.” 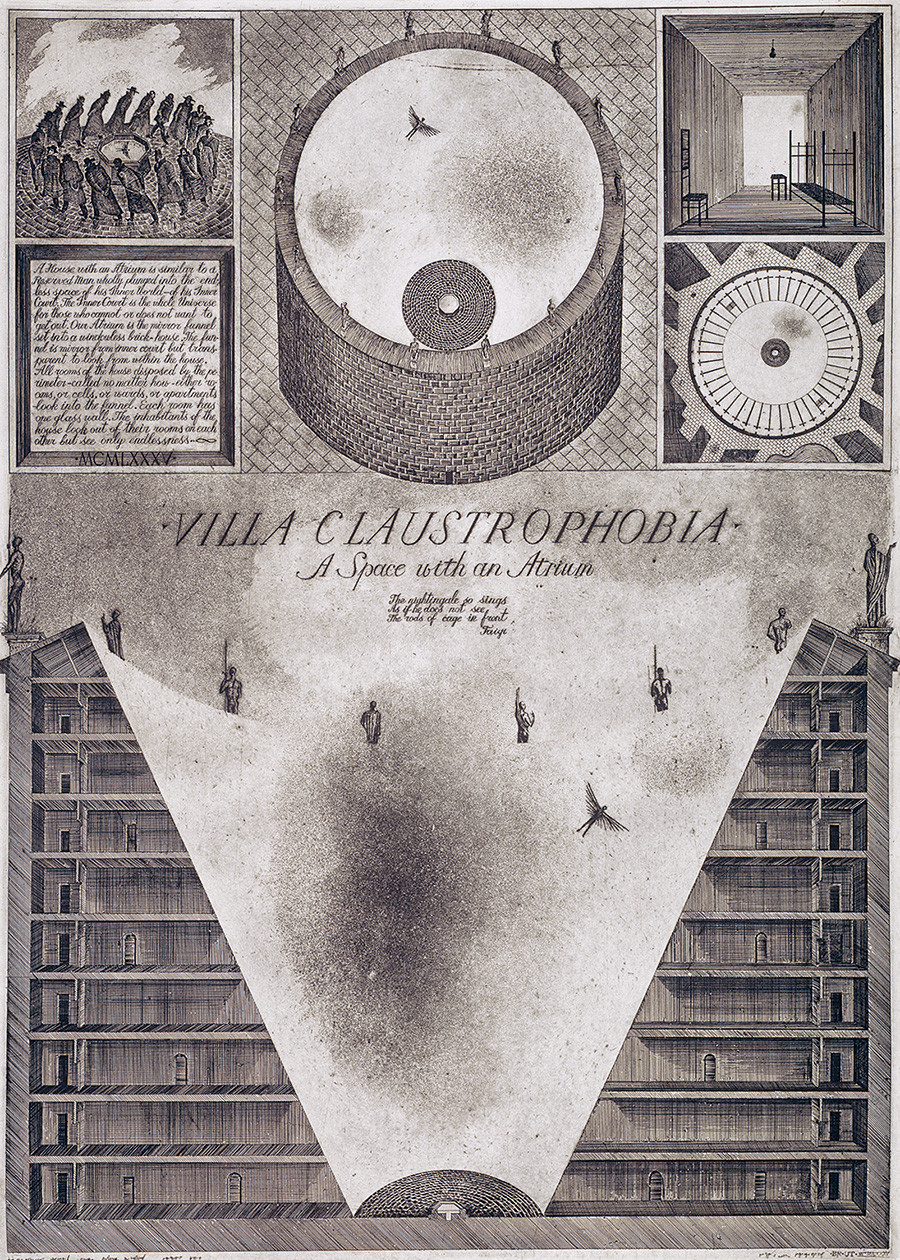 In the design of this building, the architects’ point of departure was the image of man and man’s problems. The Inner Courtyard here is likened to the inner world of someone who cannot or does not want to go outside.

“Our Atrium is a mirrored funnel inserted into a windowless stone building. The funnel has a reflecting surface from the courtyard side and is transparent when viewed from inside the building. All the living spaces arranged around the perimeter – it doesn’t matter whether you call them rooms, cells, chambers or wards – form a single glass wall looking out into the funnel. The residents of the building look out of their rooms at one another, but see infinitude.”

8. Home for the Homeless 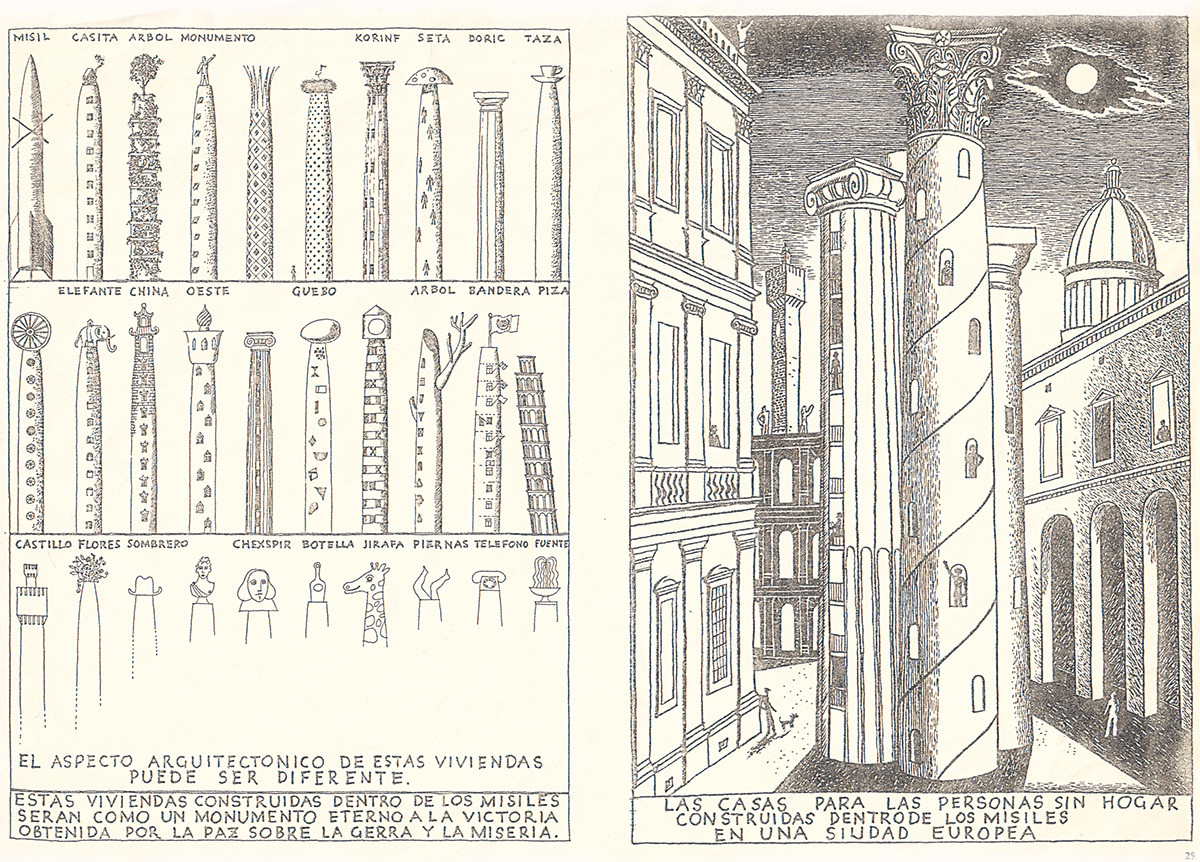 The architect thought up a witty way of disarming military superpowers – by turning the process into action art. He suggests melting down thousands of missiles, their warheads removed, making residential high-rises out of them and placing them on city squares as a reminder of the terrifying military past. 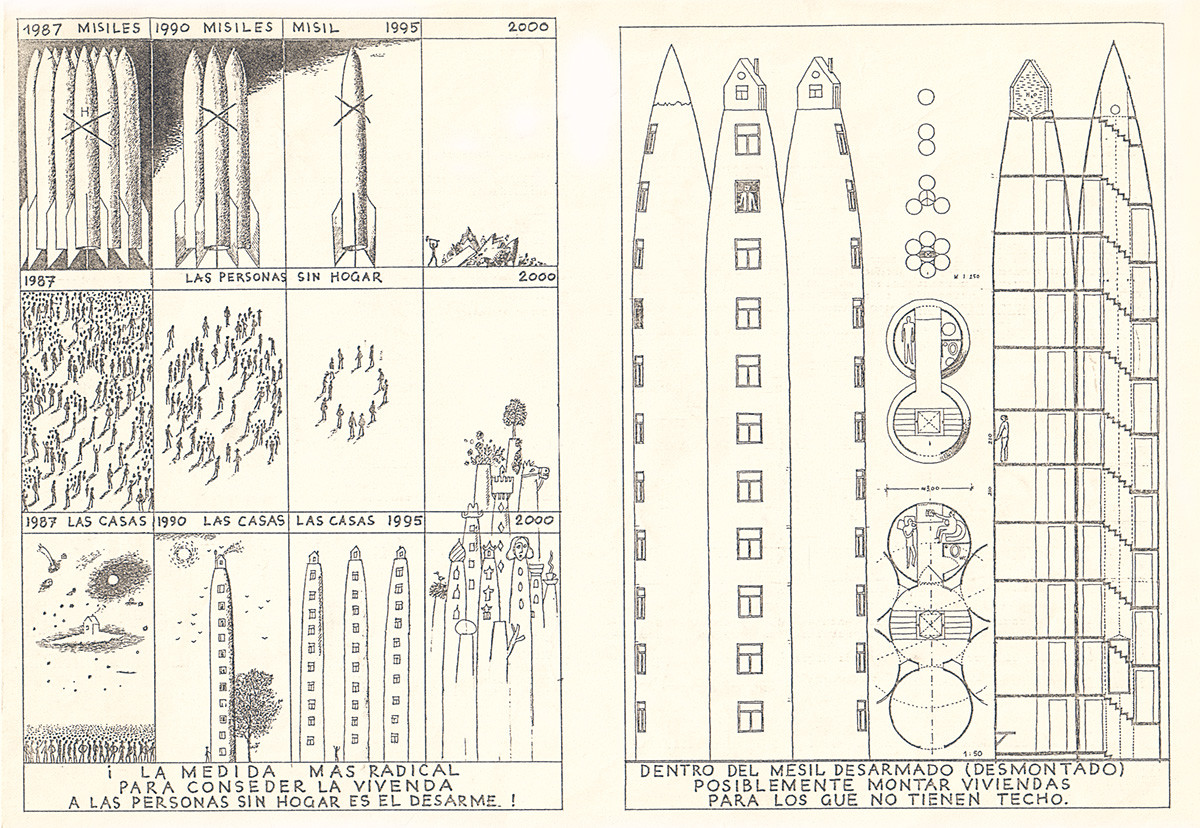 It would also be a way of tackling one of the main “peacetime” problems – the housing shortage. 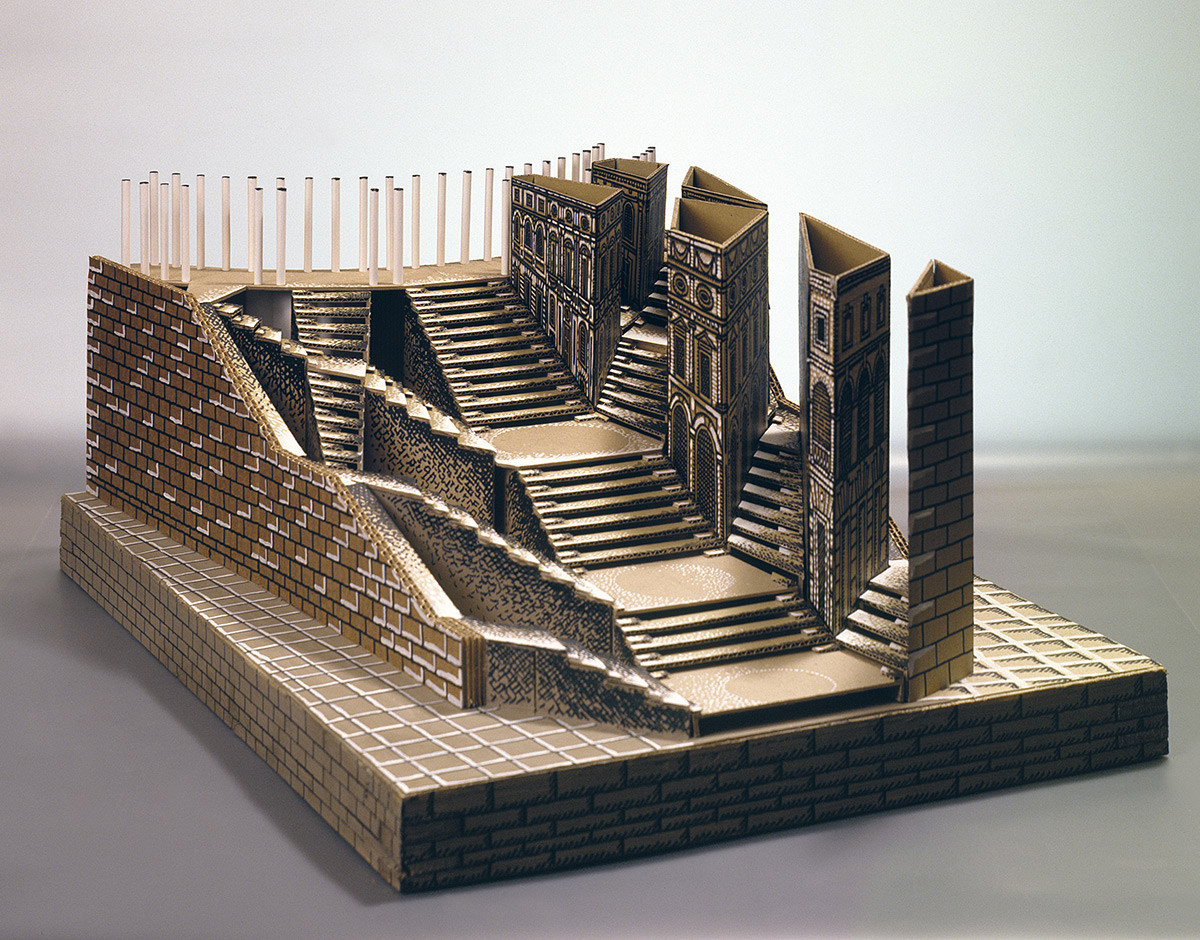 This is another project that rethinks the role of theater in the city. Each street here has been made into an auditorium and every square into a stage. Every building in the quarter plays its part – as a theater box office, dressing room, cafe or toilet. “The play of spaces never ceases,” the architects say, “as it is carried on by either “artificial” or “reverse” perspective both inside and outside the theater quarter.” 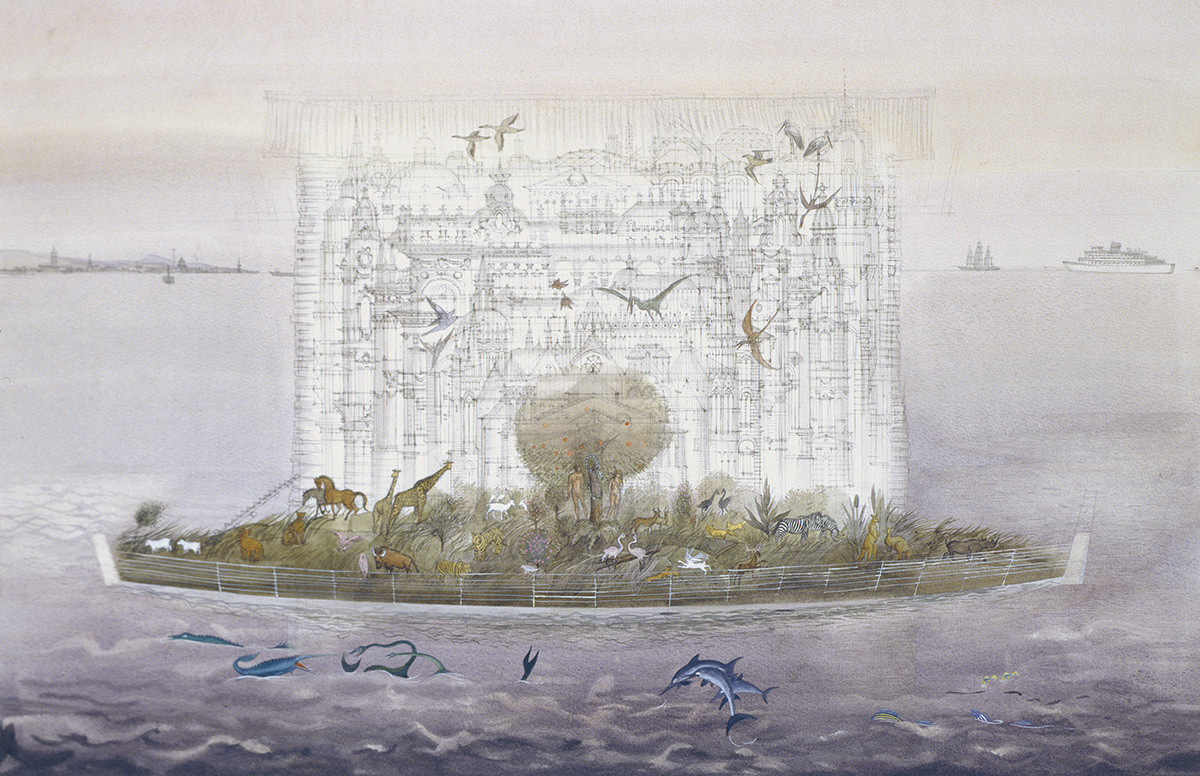 The project for a present-day Noah’s Ark is a monument to all of human civilization built on a lost “paradise”. In it, the architects have combined notions of the ideal city from each of the last 10 centuries. The final layer is dated 2001 and it symbolizes the dream of preserving the culture of many centuries.

Yury Avvakumov’s book ‘Paper Architecture. An Anthology’ was published within the publishing program of the Garage Museum of Contemporary Art, Moscow. Russia Beyond thanks the museum for its support in preparing the article.

If using any of Russia Beyond’s content, partly or in full, always provide an active hyperlink to the original material.