The episode on Wedneday 18th November is very powerful. What was it like recording this, particularly while following social distancing?

Wilf: Firstly, when I read it, I genuinely started crying, Tim Stimpson wrote the episode. The writing is just… 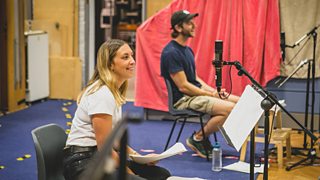 Hollie and Wilf in The Archers studio in August 2020

Wilf: Yeah, it’s harrowing. And it’s so easy to sort of over-do something like that but it’s not at all, but it still manages to be incredibly powerful. So I sort of felt quite intimidated by that.

Hollie: I think we both did, didn’t we?

Hollie: I agree, because what’s happening to them [Alice and Chris] happens in real life to people, I think we felt quite honoured that we’d been trusted with this story and particularly this scene that’s so powerful and heart-breaking. She has a huge problem and he doesn’t really realise the extent of it until he has to see it. And to see somebody that you love in such a vulnerable state, it’s really sad.

We both turned up [to record] that day feeling like it was a big day for us!

Wilf: Yeah, we were a bit nervous.

Hollie: Marina [Caldarone] who directed that episode was so great because she was conscious that they were very heavy scenes. In terms of the whole Covid situation, a big part of the episode is she’s in the bathroom and he’s behind a door and they can’t see each other, they can only hear each other. So, when we recorded it we actually did have big screens in front of us, didn’t we, and I couldn’t actually see you and you couldn’t see me, which made it more realistic. In a way it went in our favour.

Wilf: Part of The Archers and voice work is to try and inject effort into your voice if you’re having to do something which is accompanied by our wonderful spotters [spot sound effects creator] with the appropriate sound effect. So, Chris is cradling Alice at the end, there would be a bit of clothes rubbing and that sort of thing to make it sound realistic and to paint the picture for the listeners.

Hollie: We were sort of both on our knees, but Wilf has his microphone and then I have my own, 2 metres apart. Whereas we used to share a mic…

Wilf: Yeah, there were two microphone setups that day both quite far apart so that even when we were doing an intimate scene you as the actor get closer to the microphone to make it sound like you’re closer to each other. But actually, in reality, we were still metres apart.