Chimneys, Overhangs and Anchors: The Architecture of Climbing Gyms

Climbers embrace their own type of architecture. Between barn doors, mantels and multi-pitch routes, rock climbing and bouldering take on a range of surfaces, materials and structures, whether outside or indoors. Today, more recreational centers and sports facilities are including climbing walls as the sport grows in popularity. As spaces to build strength and unwind, climbing gyms as built as their own interior worlds to explore. 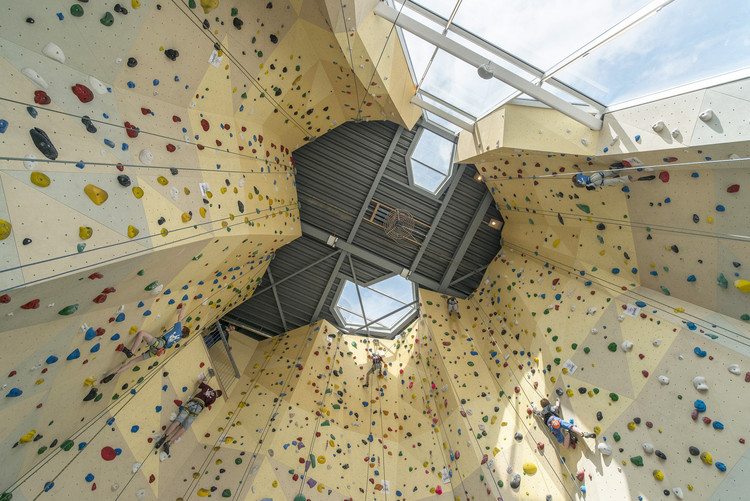 The climbing craze is nothing new, but it’s certainly experiencing an uptick. Indoor rock climbing saw a larger growth in popularity after the announcement that the sport would be a part of the Olympic Games in Tokyo. As a result, more climbing gyms are being built around the world, a series of large, indoor facilities that make the most of vertical space. Manufacturers have started to create features that mimic those found in nature, including pinnacles, arêtes, arches, chimneys, cracks and more.

The rock climbing gym Allez-Up is at the heart of the revitalization project for Montreal’s Southwest borough. Flanking the Lachine Canal, the site and silos of the old Redpath sugar refinery have been converted into a one-of-a-kind indoor rock-climbing facility, adding significantly to the recreational and tourist attractions of the Canal.

Belay MKE is a mixed-use development at the northern edge of downtown Milwaukee, a formally restrained building that combines an 18,000-square-foot indoor rock-climbing gym with 46 small apartment units. The project occupies an urban brownfield site known as Humboldt Yards, where the repair shops of the now-defunct “Milwaukee Road” Railway were located until the early 1970s.

The indoor rock climbing hall in Brixen arises close to the historic center and is therefore – compared to other similar sport infrastructures – designed to make a statement. Nature and landscape are intertwined into the building through a transparent façade design; at the same time, the inside remains visible to the outside.

The design concept of this sports center was generated from the idea of stacking all the required programs in the most compact form, which incorporates playful building sections that engage indoor space with outdoor surroundings, and at the same time, involves spatial arrangements with visual connectivity. Inside, the fourth floor houses 2 basketball courts and a rock-climbing room.

As the design team explains, the pendulum has started to swing and people, especially Gen Y’ers, are craving human interaction, physical community, and socially stimulating environments. Brooklyn Boulders (BKB) builds and operates hybrid rock climbing and fitness facilities to foster environments where diverse groups can be brought together to forge one cohesive vibrant community.

The Mashouf Wellness Center at San Francisco State University is a new center of student life and an iconic campus gateway. Located on a prominent intersection at the edge of campus, the facility includes a mix of social, recreational, and competition spaces. Visitors enter the building into a two-story “mixer” space with a climbing wall that serves as an active backdrop to the main entry and lobby space. The climbing wall reaches up, culminating in a glazed rooftop “lantern” that provides natural light to the main lobby and a more organic climbing experience.

Spordtgebouw is a combined sports facility for three separate schools in the so-called ‘Leerpark’. Traditionally, individual schools have their individual gymnasiums. But by combining the sports halls into one compound, the quality of sports education could be improved. During the day the building is dedicated to the schools, but in the evening and weekends it is open to everybody.