A 2.5-metre carpet python left a trail of destruction after slithering into a family’s home and destroying their bathroom.

The snake, which isn’t venomous, was found in a house in Tallebudgera on the Gold Coast.

The family was woken up to find the snake trashing the bathroom while ‘making a poor attempt to escape’, South East Reptile Relocations said. 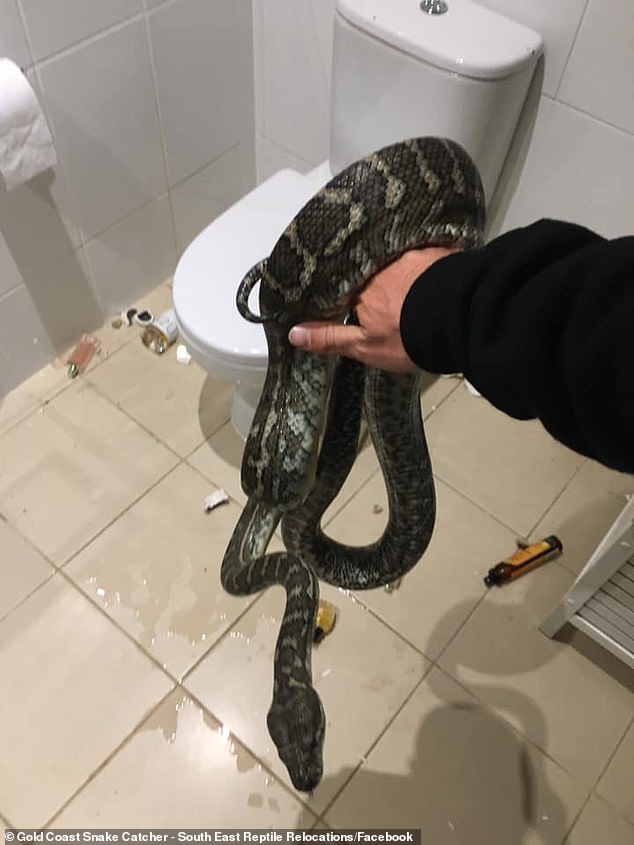 The 2.5 metre carpet python, which isn’t venomous, was found in a home at Tallebudgera on the Gold Coast

The family snapped a photo of the mess the python left behind after knocking over perfume bottles, aerosol sprays, and toilet paper.

Just two weeks ago, another Queensland family discovered a python on their property.

Reptile removalist Glenn Lawrence was called to a job in Jimboomba, in south Brisbane, where a python was lurking in their bird aviary.

When Mr Lawrence arrived and removed the snake, they realised one of their dozens of Finch chicks was missing.

‘The snake got in there quite easily but it ate a Finch then couldn’t get out again once it had a lump in its belly,’ Mr Lawrence told Daily Mail Australia.

‘The Finches were trying to scare the snake off, by flying over and swooping at it but it was trapped.’

Mr Lawrence said the snake was a little baby and was less than two years old, measuring only about 50cm in length.

While feeding their Finches, the family noticed a coastal carpet python nestled on a beam near the enclosure’s roof after watching the birds repeatedly swooping into the area. 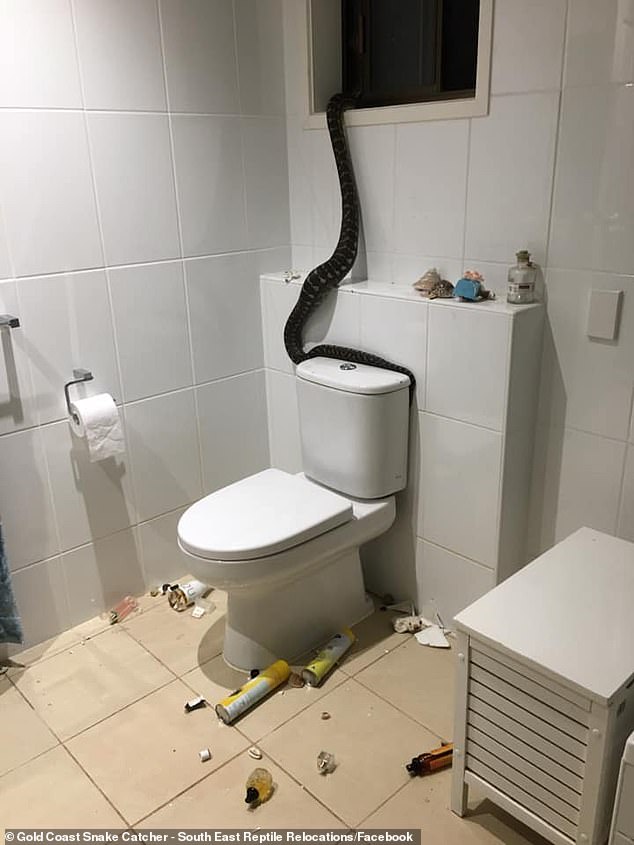 The family captured a photo of the mess the python left behind after knocking over perfume bottles, aerosol sprays and toilet paper

Tony Morrison, a professional snake catcher from Redlands in Queensland’s south-east, said the serpents are ‘showing no sign of letting up’ heading into summer.

In Brisbane’s north venomous brown snakes and red belly black snakes have been spotted in Caboolture and Narangba.

Logan City, with a population of just over 325,000 residents, has attracted its share of unwanted house guests in recent weeks.

Emerging suburbs such as Cedar Vale and Tamborine have also encountered plenty of snakes, who help combat the number of rats and possums in the area.

Those animals are lured to the suburbs by the sheer volume of garden plants, vegetable gardens and fruit trees on offer – but they have rapidly disappeared in the past couple of months.